July 13, 2010
Multitasking, which is defined as simultaneously working on multiple tasks, exacts a horrible toll on productivity! 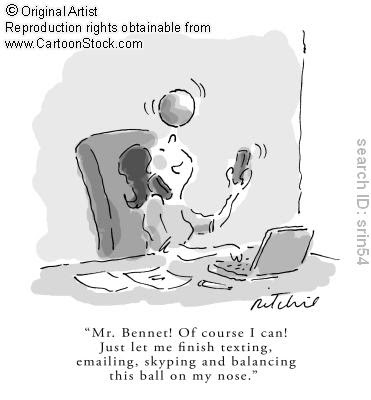 Clark and Wheelwright (1993) studied the effects of multitasking and found that the time an individual spends on value-adding work drops rapidly when the individual is working on more than two tasks. (some people are immune to this like Spock (then again the vulcans will argue that this is illogical), Robocop, Data, Jamie Madrox (well he can duplicate himself so its not exactly multitasking :P) etc...) 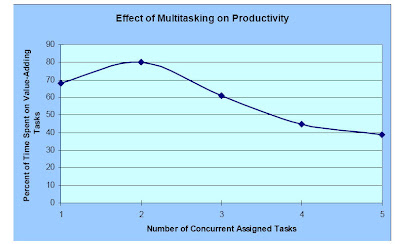 Logically, it makes sense that multitasking helps when you have two things to work on. With two value-adding tasks, if you become blocked on one you can switch to the other. It is also logical that the above figure shows a rapid decline in time spent on value-adding tasks after a second task. We’re rarely blocked on more than one task at a time; and, if working on three or more concurrent tasks, the time spent switching among them becomes a much more tangible cost and burden.

Multitasking often becomes an issue once a project starts to have some activities finish late. At that point dependencies between activities become critical. A developer waiting on the work of another developer will ask that developer to deliver just a subset of work so that he may continue.
For example, suppose a developer is to spend ten days working on some database changes, then ten days implementing an application programming interface (API) for accessing the database, and then ten days developing a user interface. This can be seen in the above figure. Dev 2's work is held up until dev 2 gets the API from dev 1. Dev 2 asks dev 1 to do just enough of the API work so that they can get started. Similarly, the tester asks dev 1 to do just enough of the user interface so that they can begin automating tests. Dev 1 agrees and the schedule becomes as shown below;

This often gives the illusion of speed, but as shown above, the work takes longer to complete :)

Popular posts from this blog

A list of problems with traditional planning (which I have actually experienced more or less)...what the heck is planning? - III

The purpose of planning is to iteratively arrive at an optimized answer to the ultimate new product development question of what should be built. That is, what capabilities should the product exhibit, in what timeframe, and with which and how many resources? Unfortunately, the traditional ways in which we plan projects often let us down. In answering the combined scope/schedule/resources question for a new product, our traditional planning processes do not always lead to very satisfactory answers and products. As support of this, consider that nearly two-thirds of projects significantly overrun their cost estimates (Lederer 1992), 64% of the features included in products are rarely or never used (Standish 2002) and the average project exceeds its schedule by 100% (Standish 2001). Most causes are as follows; 1. Planning by activity, rather than feature. 2. Multitasking more than one can handle. 3. Features, not by priority. 4. Ignoring uncertainty. 5. Estimates turn into commitments.
Click for More >>> In the post , a little bit of background or what planning is normally taken as was covered, now we get into the nitty gritty of what was really meant by reducing risk, reducing uncertainty, supporting better decision making, establishing trust and conveying information. Reducing Risk Planning increases the likelihood of project success by providing insights into the project’s risks. Some projects are so risky that we may choose not to start once we’ve learned about the risks. Other projects may contain features whose risks can be contained by early attention. The discussions that occur while estimating raise questions that expose potential dark corners of a project. For example, suppose you are asked to estimate how long it will take to integrate the new project with an existing mainframe legacy system that you know nothing about. This will expose the integration features as a potential risk. The project team can opt to eliminate the risk right then by spending time learning about
Click for More >>>